I have a very unique job here in Prague.  In addition to working with a local church, I coach American style football for the Prague Lions.  And for those who don’t know, it is necessary to specify “American style.”  For this post, I will focus more on the football aspect.  I’ll give you a brief introduction to American football in Europe, as well as a peek into what a week looks like for the Prague Lions, and an account of what game day looks like for us.

It’s, frankly, a little difficult to explain American football in Europe.  A good place to start is the club system.  Pretty much all sports in Europe are club.  Sports are not attached to schools and universities like they are in the States.  Every club from the Real Madrid soccer club on down to the Prague Lions are organized as a club.  Our club currently has three teams which are organized along age lines.  We currently have a U19 program (commonly referred to as the junior team, all players are under the age of 19), a U16 flag team, and a senior team, which is our adult program.  Leagues’ seasons in Europe vary widely from country to country, but here in Czech, our senior season runs roughly from the beginning of April to mid to late July.  Our junior program runs from September to November.

Financially, our budget is made up of players’ club dues and sponsorship arrangements.  We almost never have enough money to do what we want to do, but we do what we can to get by.

Practice-wise, our week looks a little different than a high school or college team in the States.  Primarily, three things influence our practice week.  First, our guys are either professionals or students, so they do football on top of an already full schedule.  Second, since our guys work and study all over Prague, we have to allow them time to get off work or out of school and time to get to practice, usually via public transportation.  Third, we have a budgetary restraint, as well.  Since we do not own our field, we have to rent from a soccer club, which adds up pretty quickly.

All those things taken into account, we practice three times a week in season.  The senior team practices Wednesday, Thursday, and Friday, with a game on Saturday or Sunday.  We  have meetings and film at 7pm, with practice from 8pm-10pm.  We also hold an offseason junior training on Monday nights.

I started this post wedged on a bus bound for a game in Trnava, Slovakia, so I’m going to give you a blow by blow of what our day looks like when we have an away game.  It was one of our longer road trips at around five hours.  We rolled out of bed at 5am to get things together and get out the door to catch a 6:00am bus.  Once we got there around noon, we got off the bus, got uniforms handed out, did pregame, kicked off at 2:00pm, showered, and headed home.  We arrived back in Prague around midnight, dropped some stuff off at the field at around 12:30am, drop the rest of the stuff off at Zach’s flat at around 12:45am, and home by 1:00am. 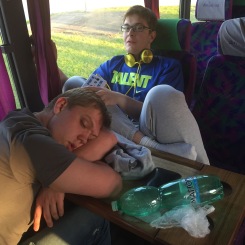 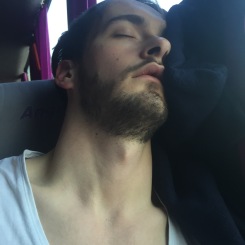 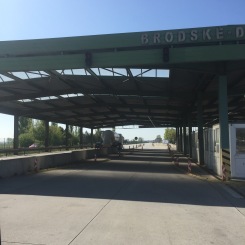 Stop at the Slovak border

All told a 16-18 hour process for a two and a half to three hour game.  This is on top of all of the game planning, film watching, and practicing that we do during the week.  Inevitably there is always something you have to deal with, whether you are the home team or away.  Last year on this trip, the bus broke down and we were 4 hours late getting to the field.  This year we had a minor issue when the toilet in the bus started to overheat.  That was only a ten minute delay.  Usually we have no problems with our busses.  I can only think of three instances in 11 seasons (6 senior seasons, 5 junior seasons). 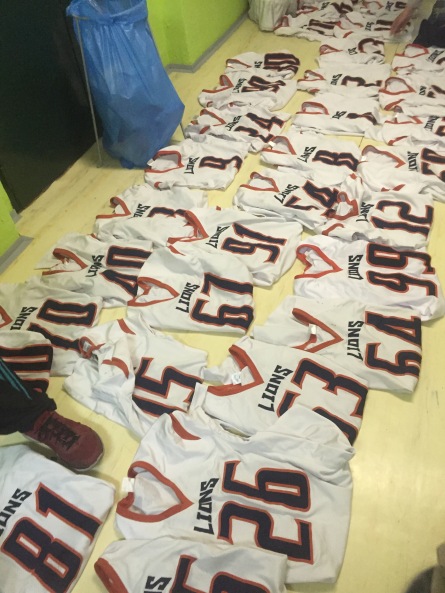 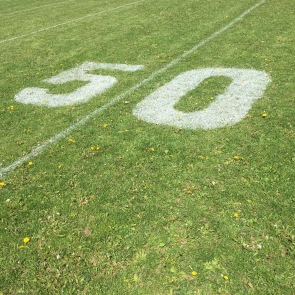 Sometimes dandelions pop up over night 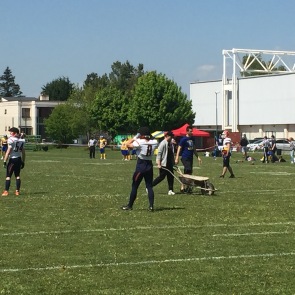 And sometimes there are holes to be filled

Despite the small delay and long road trip, we managed a 28-27 win.  Long trips home are a lot more enjoyable after a win.  That’s true wherever you play.

So that is a very brief introduction to American football in Europe.  It’s a lot of work, but it really is a lot of fun, too.  I really enjoy coaching.  I get to spend part of my week with a great group of guys who truly love the game of football.  Like most things, the experience can get frustrating at times, but it really is a lot of fun to coach the best position in the best sport in the world.  If you are interested in learning more or possibly supporting what we do here, keep reading this blog, click the support button at the top of the page, or visit the website of a foundation Zach and a few friends and I set up by clicking here.  For more information on the Lions in general, feel free to visit their website here.